Talk about anything / Re: Blade - Anime!

« Last post by KilDun on November 12, 2021, 02:33am »
Currently, free streaming is available!
In September, it announce to streaming free on YouTube
93

Talk about anything / Re: How do you feel yourself? / General Talk about everything

In the XML1 prototype, the Xtraction Point is red, transparent, and doesn't have that blue light shooting up from it.
Now you can enjoy this in XML2!

If you want to remove the blue light, remove the file "extraction_loop.xmlb" from the folder "X-Men Legends II\Effects\base\misc"
I'm not sure what "extraction_burst.xmlb" in the same folder does, but if at any point you see some blue light coming from the Xtraction Point, try removing that file too.


Credits:
BaconWizard17 for discovering this
95

« Last post by Rampage on November 11, 2021, 11:22am »
For anyone else who is seeking to play mua1 PC coop, I have found that parsec works far better for me rather than hamachi and the online patch. If you would like to play coop, msg me on discord at Rampage#0841
97 Those are skins only for PC. Some of them are merely a change in color texture, but made a considerable difference on gameplay. I'll make a video with them later. Now I'm having some problems with my controller. 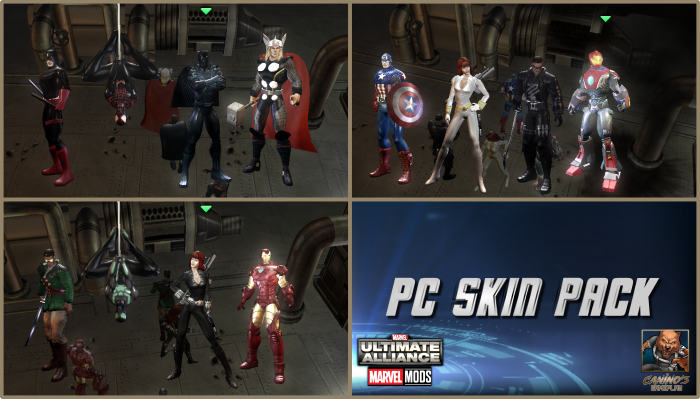 « Last post by Ceamonks890 on November 09, 2021, 05:33am »
KILLER CROC
Born within a slum in Florida, Waylon Jones was cursed with a rare congenital medical condition that caused his body to develop progressively less human and more akin to a crocodile (his mother tragically dying in childbirth).

Raised by his drunk, abusive aunt and possessing no real friends, Waylon became an easy object for ridicule and dismissed as nothing more than a freakshow.

Upon reaching adulthood, he took up work wrestling alligators as part of a carnival attraction and gained the name of Killer Croc.

Realizing there was more money to be made in crime, Waylon head off for the infamous Gotham City and quickly became a target of the city's local vigilante, Batman (the two clashing many times before all was said and done).

Fast-forward a number of years however and Waylon Jones has found himself coming to a taxing truce with the Dark Knight, finding a new lease on life amongst Gotham's homeless sewer dwellers as its greatly appreciated protector.

Whilst out rummaging for food, Croc unexpectedly spotted a random portal in an alleyway and with curiosity getting the best of him, decided to investigate.

Upon entering through it, he found himself face to face with a humanoid lizard dressed in a tattered lab coat within a sewer.

Having not much choice in the matter as the strange 'Lizard' began to lunge at him, Croc prepared a strong counterattack...

Here's another skin and hud set, this time of Polaris

, from her recent phase with the X-Men:

It's a redesigned and recoloured version of AventureiroMax's X-23 skin, from his Mega Pack.

Many thanks to AvMax for the original skin, and ak2yny for helping me out with the global color issue.